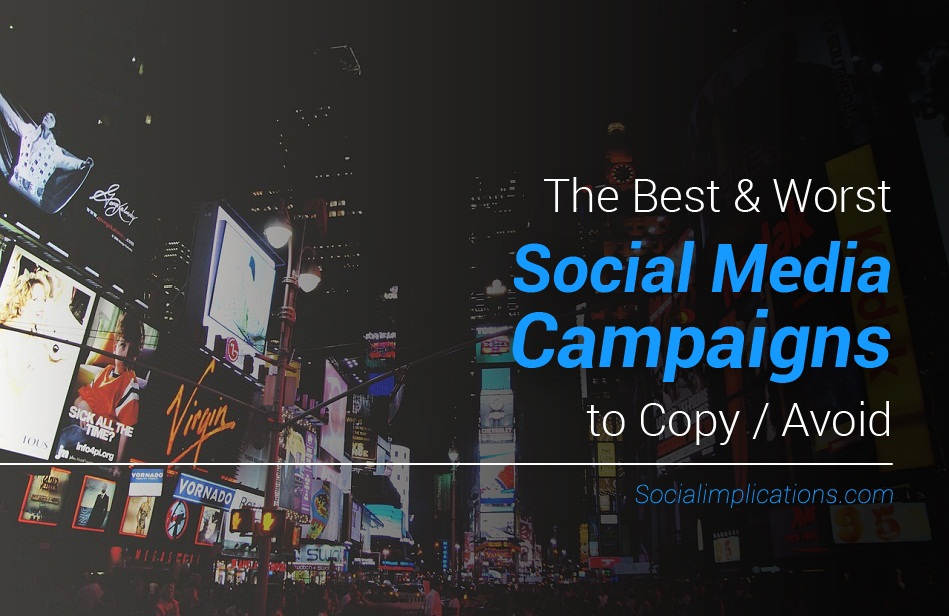 Social media has been making waves for a number of years in the marketing world. However, since last year businesses have increased their efforts to make social networking platforms a priority. It was even featured as one of the top digital trends for 2013 by Adobe.

We could sit here and list endless reasons why your company should improve your social media marketing. Yes, it will increase your customer communication, yes it is important to interact with consumers in an online community, and yes it is imperative to reach vast audiences like never before.

But we’re not going to do that. Nope. Instead, I am going to give you two examples of the best and worst social campaigns to have ever existed. Why? Well you can see for yourself why there were so successful / terrible, and you can then use them for inspiration /disincentive.

Nike had one of the best social media campaigns for 2012. Despite Adidas being the official sponsor for the London Olympics, it was Nike that came out on top in terms of consumer engagement.

The sports retailer created a massive billboard and social campaign to rival its competitor, and in short, it stole the limelight. They celebrated everyday athletes and featured the hashtag #findgreatness on Twitter.  In contrast Adidas used Team GB athletes and had the hashtag #takethestage.

I don’t think that’s bad going, given that Adidas probably spent millions of pounds to be the official sponsor.

Yes this is quite an old campaign, but I just couldn’t NOT put it into my list. It was too darn cute! The ‘Roller babies’ video, which went crazy viral, involved lots of loveable babies (computer generated of course), breakdancing, back flipping and roller blading.

Check out the amazing video; we promise it will put a smile on your face!

At the time, The Guinness Book of World Records said
the megahit was the most viewed online ad in history.

Now obviously this has since been surpassed by the sensational ‘Gangnam Style’, but to date it has had over 62 million views on YouTube, over 12,000 comments and that isn’t counting the success rate on other marketing platforms like TV or Twitter.

Back in 2010, Dr Pepper, owned by Coca Cola, launched a Facebook campaign called ‘What’s The Worst that Could Happen?’This slogan became extremely ironic because the light-hearted campaign soon turned into a fiasco.

Created by the Lean Mean Fighting Machine agency, it involved consumers being given the chance to win £1,000 if they gave over total control of their social media profiles.

The ‘takeover’ meant that anything could be posted on their Facebook status updates, however, what started out as harmless soon curdled.

The campaign used data input to create the updates, but it led to some really embarrassing / funny status updates such as running out of toilet paper and wetting yourself.

What is more, there was no minimum age requirement to enter the campaign so some damning and explicit statuses were posted on young contestant’s Facebook pages.

Many disgruntled mums vented their frustration online, with one
saying she was “absolutely fizzing with rage and disgust.”

The result? The drinks company had to pull the promotion down and its marketing department most probably had to do a lot of hard work to rebuild the brand’s image / reputation. Not everything posted was explicit, but some of the moves were very misguided.

A spokesperson for Coca Cola said at the time:

“We were unaware of the meaning of this line when the promotion was approved and have launched an investigation into why it was included. We take full responsibility and will be reviewing our promotional procedures.”

Editor note: Dr. Pepper has been running “What’s the Worst That Could Happen” themed ad spots since before the Facebook campaign – like that one some of us find them offensive as well.

In 2006, a blog in America was created called ‘Wal- Marting Across America.’ The blog was written by a married couple called Laura and Jim, who were travelling from Las Vegas to Georgia and were parking overnight at various Wal-Marts.

Along the way, they charted their journey, writing about the staff they encountered and featured interesting interviews that were very much in favour of the store.

Speculation soon arose because the posts were always
showcasing the brand in a positive light, and
the blog soon turned out to be fake.

The travelling enthusiasts turned out to be James Thresher, a professional photographer for the Washington Post and Laura St. Claire, a freelancer writer for the Treasury Department. The pair are a couple and they do have three children, but are not married.

Laura had got permission from Wal-Mart’s PR firm Edelman to park for free and in response, the group sponsored them, paying for their flights and supplying them with an RV that was emblazoned with the Wal-Mart logo.

What is more, the writer was paid for each blog post.
None of these details had been shared on the site,
and the backlash was immense.

Edelman was crowned the “king of social media screw ups” and issued an apology saying:

“I want to acknowledge our error in failing to be transparent
about the identity of the two bloggers from the outset.
This is 100% our responsibility and our error; not the client’s.”

So there you have some social media campaigns to copy/avoid.

Do you know any other humdingers which are worth mentioning?
Let us know below, peeps!