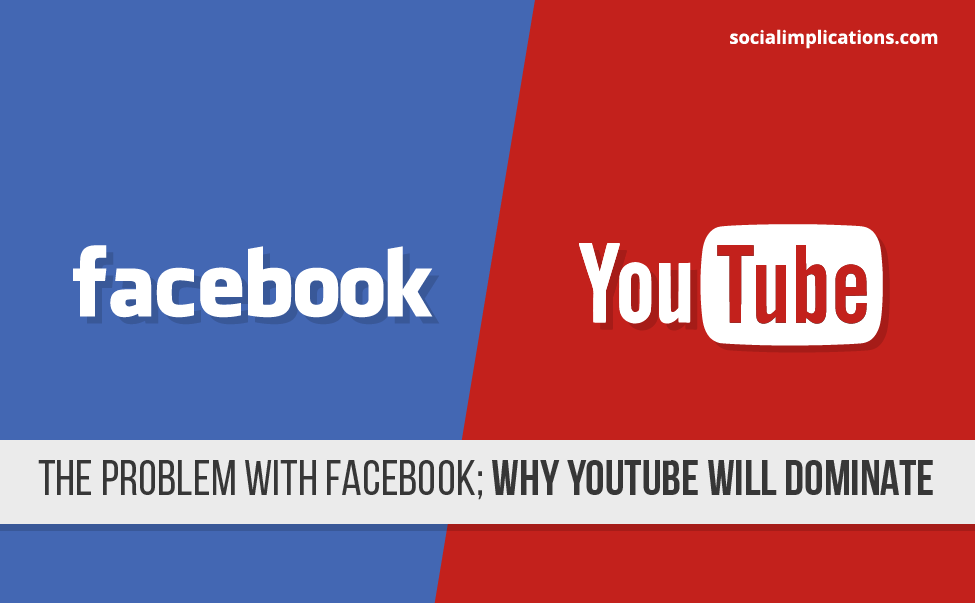 The problem with Facebook is that they have turned us all into advertisers. Facebook’s business model is a “misalignment of incentives” according to Derek Muller of the science vlog Veritasium. (@veritasium on Twitter) He created these two videos explaining why the YouTube business model is aligned with what their users and content creators all want.

Between that and YouTube having less saturation of their market than Facebook, it is obvious that YouTube is set to take off. Just as I previously pointed out that Facebook’s model is distribution fraud and also called it Facebook extortion, Derek also calls it fraud and extortion.

As Derek says, “the main organcially shared posts will be those that appeal to the lowest common denominator.” It is much easier to understand what is wrong with the Facebook model and right with the YouTube model. Online video still has a lot of room to grow so YouTube’s financial prospects are much stronger. (The increase in use of smartphones will also contribute to more videos being watched online.)

This is all much easier to understand when you watch Derek’s videos:

Facebook has already saturated most of their market and they have changed the incentives so that we see less of what we go to Facebook to do. YouTube provides just what we want and has not yet reached most of their target audience.

We’ve shared this video before, but it is so important (and also created by Derek Muller), so we are sharing it again now. Before you spend any money at Facebook you need to clearly understand how allowing Facebook to grow your likes will negatively affect your account.

As we’ve shown many times, video is going to keep getting larger and larger. Regardless of the size of your business or blog or your goals, video will benefit you. The question is, will being active on Facebook?

Clearly understanding the current state of social media is essential to your success. If you are a blogger interested in working with big brands, you need to understand that their focus in primarily Facebook followed by Twitter.  Corporations take a very long time to decide to dedicate resources, and then when they do they will stay focused there for years. So if your goal is working with big brands, grow your Facebook following.

If you are a small business, whether Facebook will benefit you is more problematic. One thing is clear, though. Do NOT buy Facebook likes. Grow your audience organically. Share only what is likely to get a lot of interaction. Consider using a tool like Infinigraph to create campaigns and measure their results.

Some video creators are making substantial incomes because they are able to attract large audiences. When you create entertaining videos they get shared. Bloggers add them to their posts. They are more popular than most posts. No matter what your goals are, it is highly likely that the right videos will be beneficial in achieving them.

Social media alone is not enough. Start recording Google hangouts. Create walk-through videos using Screencast-o-matic. If you don’t want to create your own videos, search YouTube and other video hosting sites and add the best videos you find to your content. If you don’t want to record your own, at least participate in Google Hangouts on Air hosted by others.

By 2017, video will account for 69% of all consumer internet traffic, according to Cisco. Video-on-demand traffic alone will have almost trebled.

This is one prediction you need to take seriously. Video is not a fad. It is only going to keep growing. Find a way to create videos or at least use the videos created by others. Upload those videos to multiple video hosting channels. Turn the videos you have into slideshares. Turn your slideshares into videos.

Marketing is like surfing. You need to see the wave coming and position yourself in front of it. Video is a huge wave. Start paddling now.