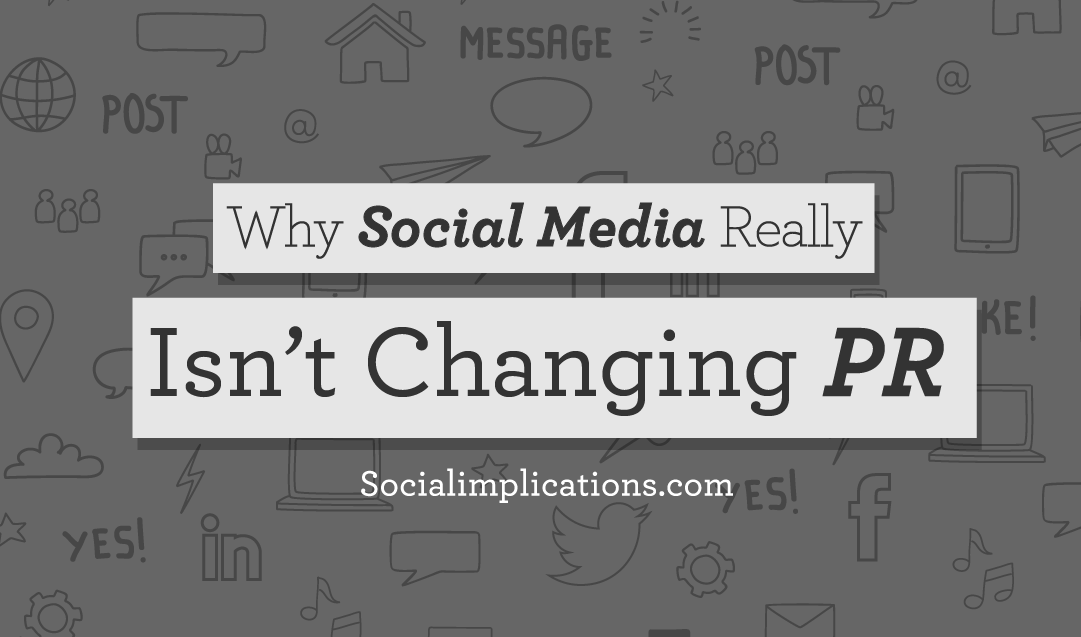 Every once in a while I come across an article talking about how social media is changing or “saving” or revolutionizing public relations in some way. Most recently was the claim that social media has helped PR bounce back from today’s tough times whereas the industry rebounded more slowly in the past when it suffered during screwy economic fluctuations and other disasters.

I take a very different perspective. I don’t think social media has truly changed PR at all. That’s right. At all.

Why? Because the fundamentals are still the same. When I see people writing about changes, they tend to focus far too much on media relations — often confused with public relations as a whole. But in the end companies and organizations still want to reach the same types of audiences, they still need to manage their image, and they still need to build and maintain relationships. None of the fundamentals of public relations have changed with the onslaught of social media.

What has changed are the tools being used. But that’s a far cry from changing an industry. It just alters the day-to-day aspects of what we do to reach those same old goals. And that’s normal. It’s not specific to social media. Tools have been introduced and changed before social media came along, and that will continue to happen long after “social media” becomes a passé term. Folks, that’s just the evolution of business.

When it comes to the PR industry rebounding, I don’t really credit social media. Keep in mind, social media was around during past supposed slumps too, even if in a somewhat different format than what we’re used to today. Social media is nothing but what you make of it — like any tool.

What did seem to change was professionals’ attitudes. Social media didn’t change anything deep down. But for those who believed it did (or would) it lit a fire under them. It got them excited about something. There was renewed passion in the PR industry. And for that I have no problem crediting social media. But I think more of the credit needs to go to the individuals.

So no, social media didn’t change PR. Public relations, like most industries, is always changing in some way. Social media just came along for the ride. It’s been a fun ride at that, but let’s keep the focus on educating both our clients and ourselves about the still-important fundamentals of what public relations is really about, and then we can talk about how to use our shiny new tools to reach our (and their) end goals.