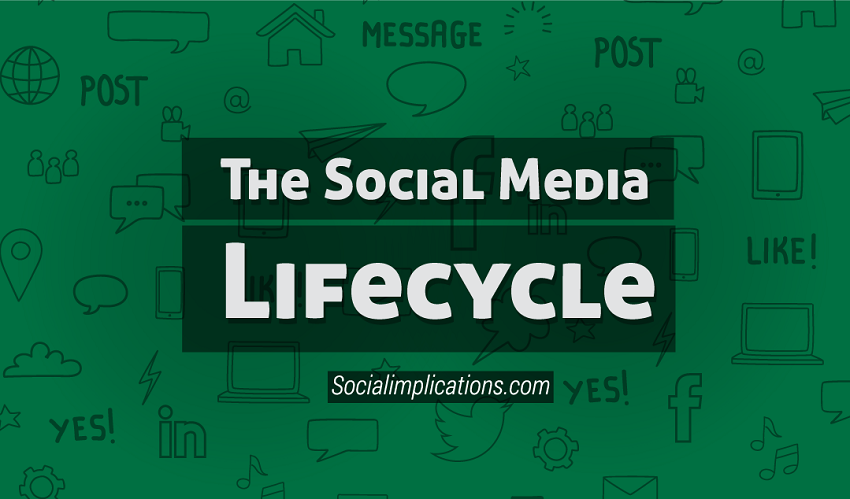 I don’t make it a big secret that I’m not a fan of Facebook. Yet I don’t let the hype about the site get me down too much. That’s because I know it won’t be around forever — at least not in its current dominant role. You know how they say we can learn a lot from history. Well, that goes beyond war and politics. We can learn a lot about social media from its (brief) history as well. And that history shows a common social media lifecycle — one that I see Facebook already taking part in.

This isn’t an anti-Facebook post though. They’re just the largest current example of a social media site that seems to be going through this process. So let’s talk about it, where Facebook seems to be, and where some other big social media players are right now.

The Social Media Lifecycle: What it Applies To

I think it’s important to note that this social media lifecycle doesn’t apply to all social media properties equally. Not only will there always be exceptions to the rule, but this is something I’ve mostly observed from social media sites that start out with a niche focus and move into more general appeal. Those that stick to being niche social networks might not all be immune, but they do seem to go through the process much more slowly if at all. So, for example, this observation of a possible social media lifecycle would apply to sites like Myspace, Facebook, and Digg. However, we’ll mention a few that started out more generalized as well including Squidoo and StumbleUpon. 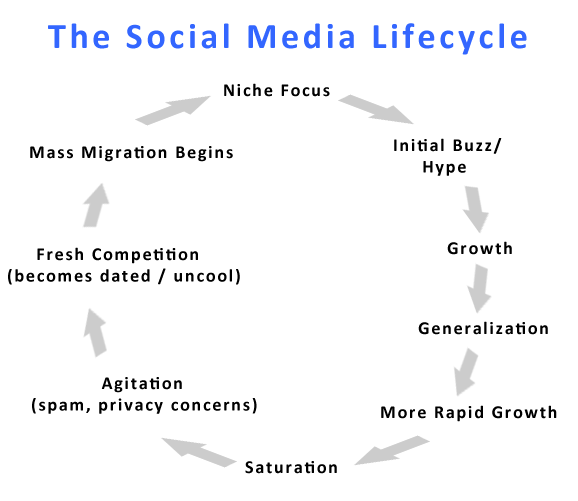 Myspace is one of the best examples of this social media lifecycle in action because it’s gone full circle. It started out with a fairly good reach in the music niche. But with the hype and buzz surrounding the site it started to grow. And that growth morphed into a more general mass user base (at that time, largely “fans”). So the site catered to that more general audience, eventually trying to do too much (connecting long lost classmates, serving as a classified site, and more).

Spammers took notice and hit the site hard. Myspace couldn’t (or at least didn’t) keep up with the social network spam. People got pissed off. Facebook began opening its doors to more users and became new competition. People wanted someplace else to go, so they left Myspace in droves. Myspace became the “uncool” place to be somewhat quickly. Traffic took a dive. And the last I heard, they were attempting to go back to their original niche focus of specializing in social networking around music and entertainment.

I don’t expect everyone to agree with me about this little lifecycle idea. But I’m fairly confident in it after watching trends with several other social media properties. I started taking part in a lot of the bigger social media sites when they were fairly new. Many of them initially targeted webmasters, online business owners, and those interested in SEO — audiences I worked with through my former firm, so I stayed well on top of these tools. Interestingly, quite a few are already along the lines of being dated. Their novelty has worn off with at least a segment of that initial user base. And that’s often a result of spam, followed by better (or at least newer) tools coming along.

Squidoo is an interesting example. Take a look at their pageview stats at Alexa.com. (Note: I don’t claim Alexa stats are completely accurate or that it’s a great tool — I find most site metric sites to be seriously lacking. They’re used solely for comparison purposes.)

You’ll see that in 2009 we went from relatively stagnant (although somewhat erratic) pageview levels to seeing a definite increase by early 2010. It appears that the initial user base kind of leveled off, and then there was newfound interest. That jives with anecdotal evidence — most people I know who used Squidoo heavily when it was new have long since moved on. It appears to be in that phase of either saturation or nearing it with a broadened group of users.

Now Squidoo really is interesting in that I don’t think we’re going to see traffic suddenly die off any time soon. I can see their site rounding the curve fairly slowly, and for a few reasons.

Squidoo used to heavily appeal to people wanting to promote their businesses. Now most of the times I hear people talking about Squidoo, it’s coming from content producers who consider it a “make money online” opportunity better than some of the more typical revenue share content sites.

StumbleUpon followed a very similar path a couple of years ago, with the original tech-savvy audience in large part moving on and leaving it to a much broader user base. As of now that userbase still seems to be growing — that rapid growth phase I mentioned before saturation hits. I have to give StumbleUpon credit for getting past multiple spam waves early on and still continuing to grow (both spamming by constantly submitting your own sites and no one else’s, and stumble exchange spam). But like I said, there are certainly exceptions. And I have a feeling StumbleUpon will probably be another one that sticks around a bit longer, even if it’s minus the initial buzz.

Digg is another example. It had a heavy focus in the tech niche. That seems to have expanded quite a bit. The front page results of Digg look a lot different now than they did a few years ago — with a much heavier emphasis on mass-appeal topics from entertainment to weird news and just flat out hyped up headlines.

If you view the same general pageview trends for that site, you’ll also see growth in 2009. But if you look to 2010, you’ll see what appears to be that saturation phase beginning as things start to level out a bit more. Well, that or a temporary plateau at least. You’ll actually see a very similar trend with Facebook’s pageviews during the same time period.

I certainly wouldn’t be upset to see Facebook go. But I doubt we’ll be completely rid of it any time in the foreseeable future. I’ve been predicting for a couple of years now that I don’t see spam necessarily being the big Facebook-killer (although it can always play a role if they don’t stay on top of it). Instead I think it’s action rather than inaction that will be the big agitating factor. More specifically, I think it’s going to come down to their privacy policies.

And even if by some miracle they don’t yet again piss off their users with privacy concerns, eventually that “uncool” status is bound to set in. After all, this is social media where it always seems to be about what’s next and who’s going to get there first. While they might be stuck somewhere between the saturation and agitation points now, that’s likely where they’ll stay until a suitable competitor comes along. Is it Twitter? Or will it need to be something more typically like what we picture as a “social network?”

So tell me. Can you think of other examples of social media sites that seem to fall within this general social media lifecycle? Do you personally see other steps along the way? Leave a comment to tell me what you think.