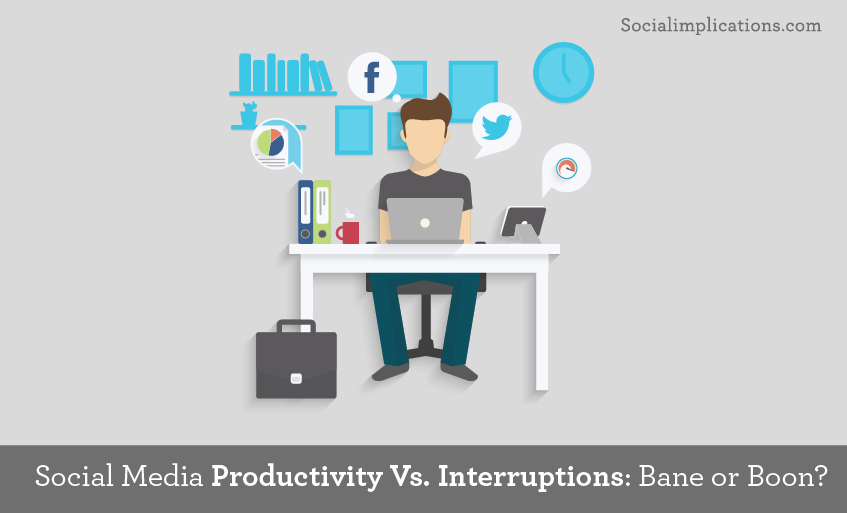 Add to the continual arguments attempting to answer the question, “can humans can multi-task effectively” or should focus on one thing at a time this new question:

I admit I am not the best person to ask because I don’t know of any other writers who operate in interrupt mode the way I do. I interact on Skype with multiple people and check into Twitter during the time I’m writing even the most complex of posts.

I’m not saying that is a fun way to do things. It is actually rather stressful, but I consider the upside so important that I don’t mind and have adapted. That upside is being able to collaborate with even the busiest individuals because I am almost always available while working.

Most people have to schedule meetings and calls far in advance – so the busier people get the less likely you can interact on a regular basis. I am fortunate to be able to do that because I have found ways to be productive even while using social media constantly.

My “interruptions” have resulted in huge opportunities!

We need to make sure we aren’t confusing failure to accomplish what is important because we are not properly prioritizing what is most important and blaming that on interruptions! In the infographic below, notice that 45% of workers believe they are expected to work on too many things at once.

While that COULD BE due to interruptions, back in my corporate days that would have definitely been due to failure to prioritize.When IBM and other huge corporations – which already had a tendency to create unnecessary tasks for their employees to deal with – started “right-sizing” and getting ISO9000 certified – we were covered up with new “to-dos”.

I went to my manager, explained there was NO WAY anyone could possibly do everything they asked us to do and asks that he prioritize his requests. His reply was they were ALL equally high priority.

So we killed ourselves trying to get to all of them only to find out that more often than not once we did something he didn’t care about whether we did it or not! So our response was to never do anything he requested the first time he asked for it.

That worked for us because more often than not that was the ONLY time he asked for it! When he complained more than once then we did whatever he was complaining about – and I really considered that a very poor way to manage your employees – not only because you don’t get what you asked for done in a timely manner – but primarily because it engenders lack of respect for management.

So before you blame your productivity issues on interruptions do make sure you have your priorities straight. I highly recommend understanding Covey’s Time Management Matrix. Life Coach Sid Savara has a great post illustrated with comics that explains it well.

While I do not recommend multi-tasking and leaving all the interruptions from Skype, Instant Messengers and Twitter running while you’re working on a major project or writing a book – I DO believe more people can benefit from being available online provided they interact with people who are just as busy as they are and respect their time.

Those I collaborate with and I leave Skype open, but make ample use of the Do Not Disturb, invisible and not available statuses while working. Let your collaborators know what each of these means to you. Stay invisible if you wish – and even turn off the sounds so you won’t be interrupted – and allow them to leave you messages.

Block people you don’t want to hear from – you know who we mean – the ones you don’t know anyway!

Most people average 4 interruptions per hour (according to this infographic). Sometimes I get that many per minute! Many writers “unplug” while writing and it is a good idea for most people to turn off distractions when working on projects that require their full attention.

What works for you? Can you maintain your productivity
while using social media or do you unplug? Do you have
Skype, email, Twitter, Google Plus, G-Talk or Facebook
open while you work – or do you have to shut them all off?
Tell us in the comments – we’d love to know!

Need some tools to increase your productivity? Try these resources: