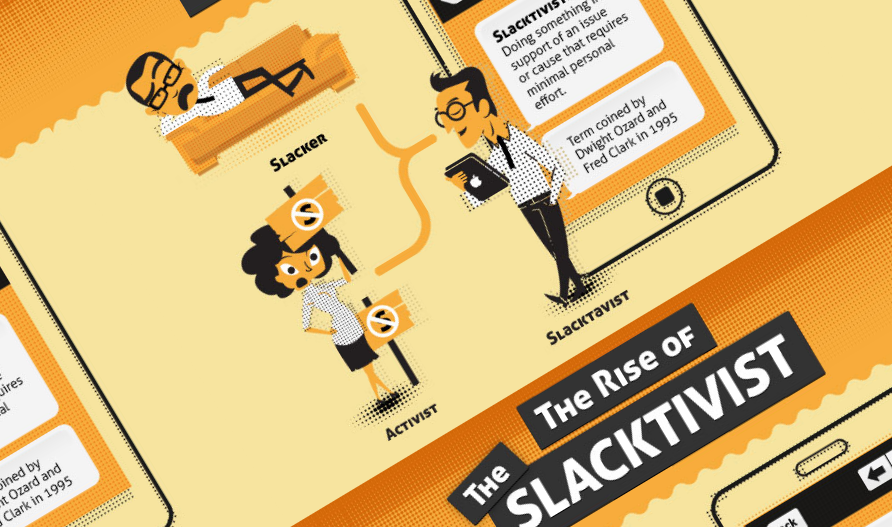 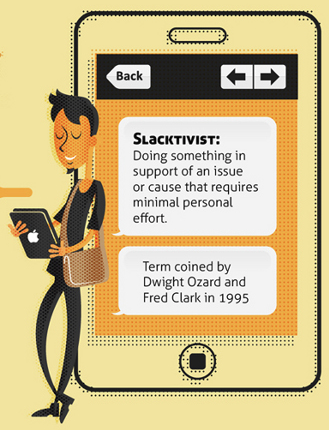 Matthew Fields over at Social Media Chimps shared his insights into slacktivism:

“People who are considered slacktivists make an impact, not because of the amount of effort or time they put in to their causes, but due to the power of social media.”

While some call this “lazy activism” I call it wise marketing.

Those who have studied what works in marketing or how to increase conversions on ecommerce sites or how to get more social media shares for your blog know that you have to make it easy to get people to act.

What works is providing very obvious and simple methods for getting others to take the action you hope they will take. Personally, I see increasing slacktivism as a worthy objective and a way to find out what the masses of lurkers care about.

Anyone who has a forum or blog knows that for every person who comments or posts there are 100+ who don’t. Those who post are the leaders who will give voice to what direction we need to head and encourage others to act.

Most people in America and around the world have no idea what is really going on around them. They only see what is covered by the major media and the owners of that media choose to not cover what we really need to know.

Most people I tell about the issues that concern me are amazed.
They have never even heard about them before.
The Internet and social media are changing all that in a very profound way.

We have collectively allowed evil to exist because we rarely hear about genocide while it is occurring or hear anything but the stereotypical “all the homeless are homeless by choice…or because they’re addicts…or because they are alcoholics…” when the REAL truth is that everyday working class people just like you and me make up the majority of the homeless and hungry.

More people with jobs go hungry than people without jobs – but the media portrays the poor as being the cause of their poverty. And now they are being jailed when the only crime they ever committed was being poor.

While true activism – actually FEEDING someone who is hungry or taking someone in who is homeless and helping them get back on their feet IS better, raising awareness and educating others is the first step so I welcome the rise of slactivism.

What do YOU think? Tell us in the comments.

Sortable The Rise of the Slacktivist