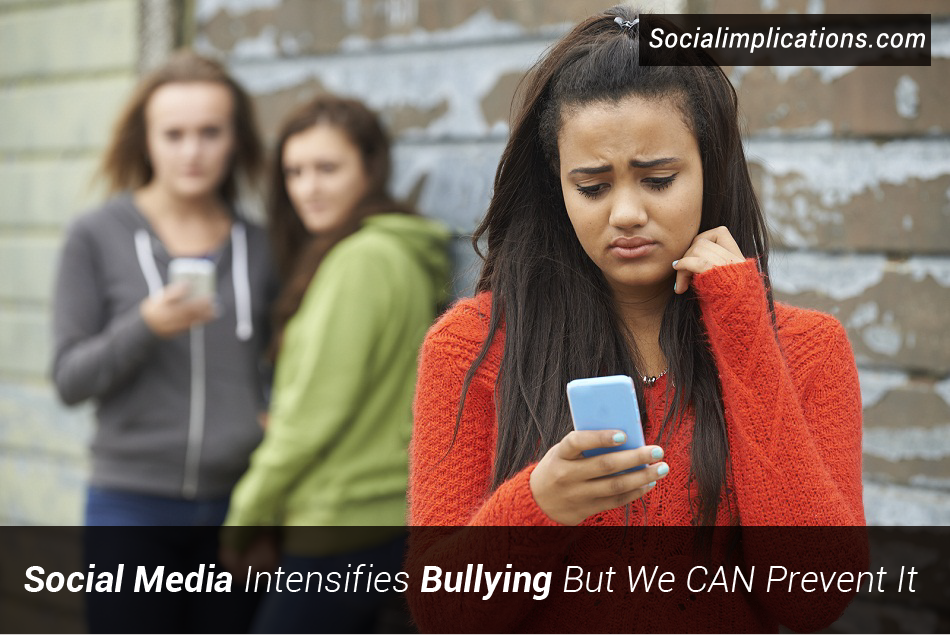 Bullying was bad enough when it could only be done one on one or in small groups in person. Social Media makes bullying so much worse because hurtful words, photos and videos can now be almost instantly shared with so many more people!

While October is National Bullying Prevention Month so you may be seeing more about it recently, this is a serious issue that goes on continually – but we CAN put an end to it if we care enough to do so. It is so pervasive because society condones bullying, but that is also why there is such an outpouring of blog posts, social mentions and videos like this one:

The reason bullying escalates to death is because people from parents to teachers to school officials do not take it seriously. Our society has many pervasive problems that are contributing causes:

Even when bullying is outrageous, adults are consistently failing to intervene to protect the victims. Teachers and school administrators should be held responsible – but that is not happening. And if they will not protect children then it is up to the parents to remove them from danger – and that also is not happening.  Here is just one of far too many examples:

The school districts involved in the videos above and below claim they do not have a bullying problem in spite of SIX suicides in one district in two years. School officials and teachers who are aware of what is going on consistently claim they “have no problem”. The Mentor School District response to a documentary being made is reputation protection – not student protection.

This is why bullying continues – because the adults involved insist there is no problem
and the victims are painted as weak, emotionally unstable, or inherently defective!

This second video is sad to me because it proves the last point I made above: that too many people blindly do what they’re told which resulted in that boy killing himself because the bully told him to shoot himself.

“The bully said to him, ‘Eric why don’t you go home and shoot yourself. It’s not like anyone would care.’ His sister found him and we’ve been living the nightmare ever since.” ~ Eric’s mom speaking out against bullying in 2012 ~

The parent’s lawsuit against the Mentor School District was dismissed:

“In the dismissal, which was issued this month, U.S. District Court Judge Donald C. Nugent found that because Mentor High School did not have a “special relationship” with the teen, they did not have a “heightened level of responsibility for his care and protection.”

“Therefore, although it is certainly reasonable for parents to expect that the school will do its best to protect their children while they are under the school’s supervision, the law does not elevate this expectation to a constitutional guarantee,” the judge wrote.”

This ruling makes it clear that parents can NOT count on someone else to protect their children so it is up to them to do it themselves. We have a nation of sheep who blindly hand responsibility over their own children to authorities. It is high time we wake up and act like grown-ups instead of slaves to a system that does not care enough to even protect children.

Just as social media can make bullying worse, it can also make it better. We can collectively spread the word and measure how far it spreads and whether people are weighing in for or against that speaking out by using social media solutions like Alerti.

We can write blog posts and comments. We can spread the word across social networks and share links to posts like this one. We can produce videos like the one at the top of this post. We can make bullying the topic of regular series like this short post where Murray Newlands discussed television anchor Jennifer Livingston being bullied about her weight and offers suggestions on how to deal with negative comments:

This graph shows where people were discussing Jennifer’s news coverage about weight discrimination being a form of bullying and shows a higher than usual percentage of discussion going on in blogs rather than just on Twitter or other social networks:

While Social Media Monitoring Tools like the solution that produced the graph above is usually used to track brand mentions, it can also be used to determine whether our efforts to create a better world are making a difference. We could set up alerts and measure whether people are beginning to understand that it is wrong to judge and criticize others or not.

By combining social media monitoring with analytics we can see how far our efforts to share how pervasive cyber-bullying is and whether posts about preventing bullying are spreading. I find it interesting that the people who are usually saying bullying is just a normal part of growing up have been awfully silent lately.

Just as smoking was once socially acceptable, but now it is not we can collectively make bullying unacceptable. All we have to do is intervene. When you see someone being attacked verbally online or in person that is the time to act. If necessary, get others to assist or phone for help. But whatever you do, do NOT just ignore what is going on.

Bullying is a huge issue online lately and I believe I know why. It is because it has affected so many lives. At least one-third of people admit to having been bullied and many carry the guilt of being the bully.

How has bullying affected your life or the lives of people you know?
Tell us in the comments. We want to hear from you.