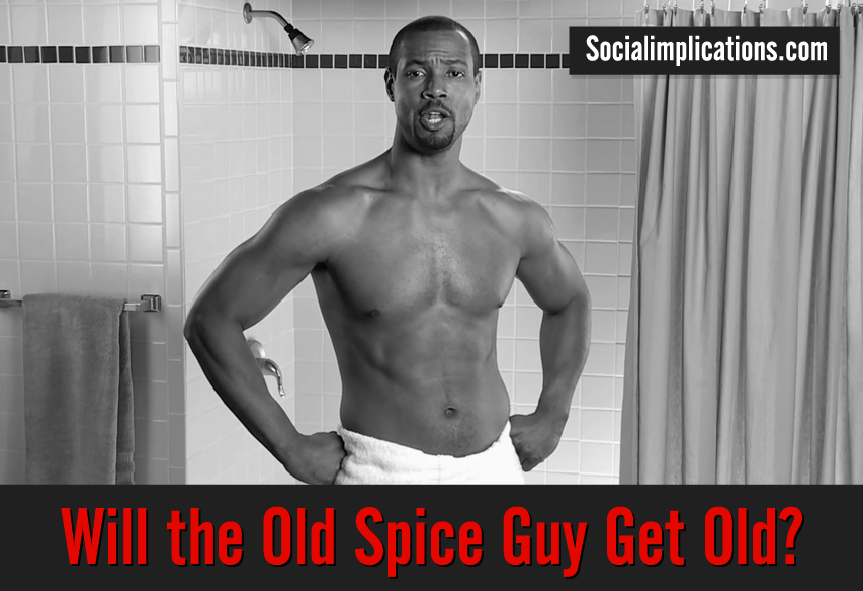 You’ve certainly seen at least one Old Spice Guy video by now. (And if you haven’t, get out from under your rock.) They have a thriving YouTube Channel and Twitter account. The company made waves with their social media campaign where the Old Spice Guy — actor Isaiah Mustafa — would create personalized response videos to questions received via social media outlets.

My first thought was “why didn’t anyone think of this before?” But actually, it’s nothing new. Companies have been directly responding to tweets and such for a while now. But Old Spice did something different. They merged advertising and entertainment almost seamlessly, turning ads into both likeable content and real conversations.

Personally, I love the campaign. There aren’t many ads I can honestly say I enjoy, but theirs are up there. They make me laugh. I actually seek out the videos instead of having ads intrusively shoved in my face. And that, folks, is (or should be) the future of advertising. But will it get old?

Old Spice has already apparently pulled the plug in that they won’t be creating more of these custom response videos. And that might be a good thing. One of my biggest concerns was that what started as a phenomenal idea might get old quickly, becoming a joke rather than making them. So I think their timing in that sense is perfect — avoiding the issue of overexposure.

And on a side note, I have to give Old Spice some major credit for showing that social media campaigns do indeed work (I’m so sick of people saying social media isn’t a campaign but a constantly ongoing conversation — no, it can be both).

Anyway, what I have to wonder now is if the success of the Old Spice Guy social media campaign will lead to a rush of imitators. And if so, will it get old, and how quickly? How many brands can we really engage with and actively follow? How many brands can we actually care about beyond simply wanting their products and services?

So from the consumer perspective I think I’m a little bit worried when social media campaigns get hyped up… not because I think all the stuffy suits of the world are going to suddenly get on board with social media and invade my “space” there, but because I worry the ones who do might ruin something good. It’s like when a new social media tool hits that point of critical mass where it’s just not cool anymore for the folks who made it popular in the first place. Am I being paranoid? Maybe.

Even more important is the issue of ROI. The campaign definitely seemed to help on the brand awareness front for Old Spice, at least among younger folks. Sure, we’d heard of it. But we weren’t talking about it. The question now is, are more people buying it? It doesn’t seem so. [Update: The source linked here now cites new information stating that sales may have indeed increased as a result of the campaign.] So what does that say about social media campaigns? To me the answer’s pretty clear, and what I’ve always thought about social media — ads are great if done well, but it’s the longtail PR work that’s going to bring about the biggest returns in time.

Of course that doesn’t mean Old Spice has to, or even should, continue the personal video responses over the long haul. The short term campaign seems incredibly effective with at least one thing — showing that the company can listen. And that’s something most, if not all, companies should strive for. Now if only they’d listen to the requests of people wanting them to “fix” their product — that would be a social media success story. It’s not just about having a conversation with an audience you want to appeal to. As a company, you still have to be able to give them what they want.