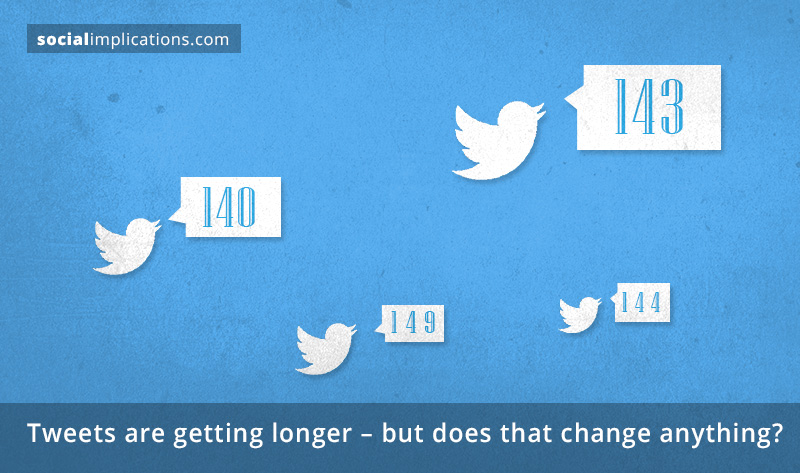 Tom Basgil explores whether or not Twitter’s biggest change to the platform to date really is a game changer.

Recently, Twitter announced one of its biggest changes to the platform – more characters. We don’t know when this will happen, but we can bet that it’ll be before the end of 2016. The move will shake up a platform built for SMS messages before the iPhone even existed.

Now in its 10th year, Twitter has 310 million active users. It’s been used to start revolutions, mourn the passing of icons, and share cat videos. Despite a decline in use by the original founders, marketers still turn to the platform for B2B and B2C.

Now, Facebook is king for B2B sales as our recently released Changing Face of Influence report discovered. However, that doesn’t mean that we should abandon our old micro-blogging friend.

So, what does this announcement mean? Basically, Twitter is removing links, images, videos, GIFs and user names from its character limit. Instead of tying ourselves to 94 characters to get in that all-important picture and link, the whole wide world of 140 characters are available. For those of you who don’t tweet on the regular, this extra space translates into a few more words.

The change will likely lower the barrier of entry to new users and might even encourage current users to be more active. Tweets won’t need to have as much thought behind them if users have more space. And, let’s be honest – Twitter is complicated for beginners. You have 140 characters, but links take up 23 characters and pictures an additional 23, and now we suddenly have 94 characters left. What if we want to include a user name? Now, we’ve lost even more.

So the character count will get easier. That’s great. To add to the fun, you won’t need to remember to add a period before starting with a user name. Tiny tips and tricks like these take time to learn. Ideally, Twitter will be easier to access for new users and the platform will become even more powerful.

As a social media specialist, this could change my game. I could adapt to think in longer sentences and increase the amount of hashtags I cram in to my copy. But, I won’t. And neither should you.

Brevity is the soul of wit, and though it’s been 400 years since Shakespeare wrote those words, that advice still rings true. My experience, and multiple studies you can easily Google, shows that a few words is more than enough. Just because you have the space doesn’t mean you should use it.

Today, where we spend huge amounts of time tied to computers and smartphones, shorter is better. Friends, family and brands are constantly vying for our attention. While some organizations may utilize the longer character count, and believe you me I’ll be asked to do it, too, audiences from every part of the funnel want to learn more in less time. We’ll sit back and watch other brands falter while our team focuses on the most important part of social: engaging with our communities.

Have questions about how social media integration can strengthen your brand? Let us know – we’re happy to help, whether by phone or by tweet.

The article was originally published on Hotwire PR’s blog and to read more, visit here.