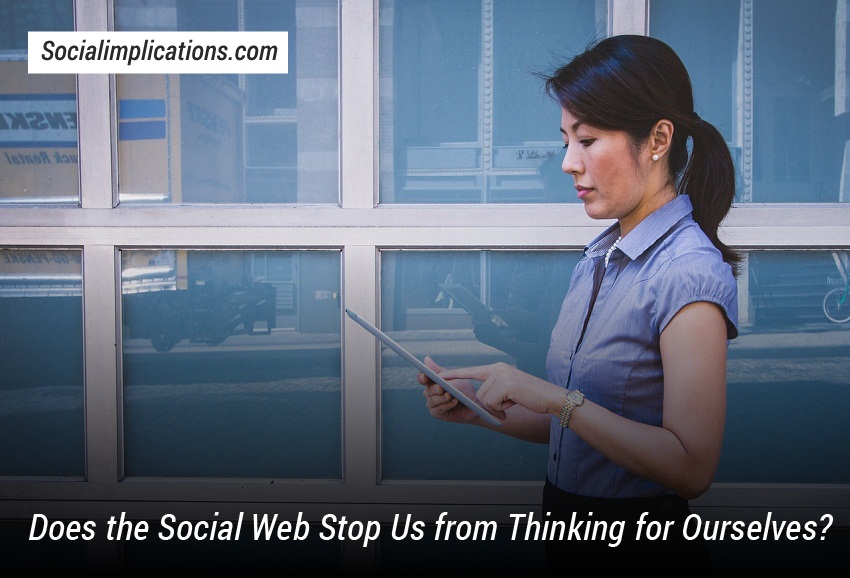 Recently I’ve torn into Mashable not one, but two, times. In both cases the issue had to do with them posting either misleading or downright false statistics and claims (and readers have since made me aware of two more instances with false headlines). People have been doing that for ages, so why did it bother me so much? It bothers me because that site has a large audience — an audience that seems to believe what they say, and an audience that proceeds to pass along that misinformation until it becomes “fact” in far too many minds, or even spreads to major media outlets (although that’s an issue all its own).

These stats issues have me wondering something. Does social media stop people from thinking for themselves? Have we lost the ability to think critically with the 24 hour news cycle and occasional blurs between general blog commentary and actual journalism (not that they’re mutually exclusive)? Let’s talk about it.

I know some people will probably say that since we have access to more information and more sources thanks to social media tools, that we’re actually better informed. And I think there’s merit to that argument. If people are responsible about the sources they follow, and they can think critically about what they read or see or hear online, then more information might not be a bad thing. We have more control over the filters now.

But there’s the issue — to make that work we have to be able to think critically about that information and know when to take things with a grain of salt. It involves a level of responsibility that perhaps didn’t exist in news consumption a few decades ago. We have the ability to pass on the news far more quickly and almost effortlessly. And while I have no doubt that many people can and do know how to evaluate sources before passing information along, I see no excuse for the thousands of retweets and Facebook shares and the like that result from hyped up, misleading information being thrown out there not only by Mashable but by any site or person too lazy to get the real story first.

Are we in a world where the virtual sound bite is the news? In a time when we’re being bombarded with message after message and story after story, is information overload leaving some of us without the time to really look beyond those snippets before we think “hey, that sounds interesting, so let me pass it along?” Is it a case of not having that time to read, evaluate, and think critically, or are people just getting lazier as they immerse themselves more in social media? Has it become acceptable to pass something along just because a friend said it for example, or because it came from a favorite site?  Or do you feel most of us are above the cliques and back-patting where we look for constant validation, and can take the broader information available and make better decisions for ourselves?

I don’t have the answers, and I won’t pretend to. I know there are some people in both groups. But I’d like to hear what you think. In your own target audience, community, etc. do you feel that the social Web helps or hinders the decision-making and critical thought processes? Are we better informed, or is our information lacking because we get it in too many bite-sized pieces? Share your thoughts in the comments below.