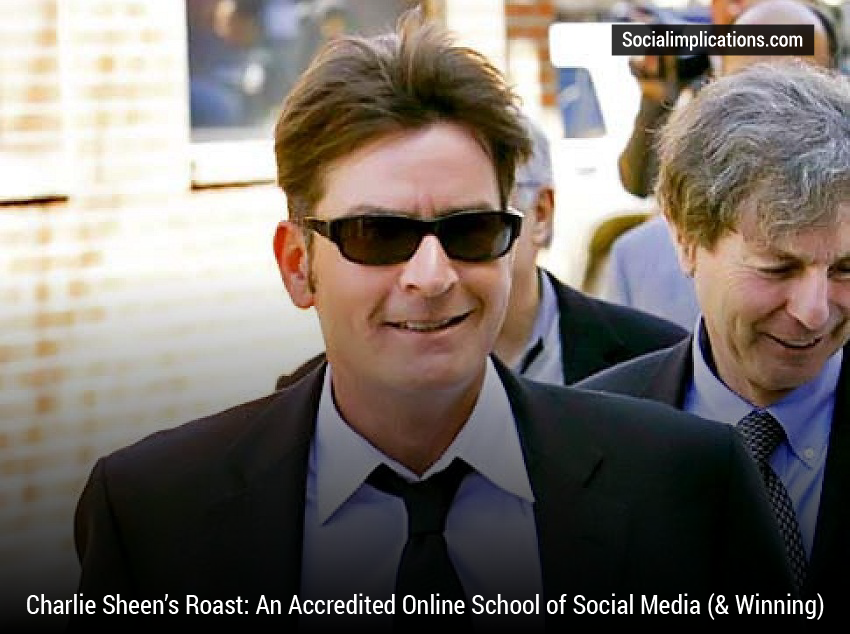 When Charlie Sheen first began his media blitz earlier this year, people thought he was insane. People still think he is insane, but it turns out he is a social media marketing genius. When he offered an open position for a college student to become his social media intern, over 74,000 ambitious Sheen-heads responded with hashtags like #winning, #tigerblood and #adonisdna.

Despite all of the wrong, despicable, and immoral things Charlie Sheen has done, he has mastered the art of social media marketing and created his cult of personality has sparked an entire accredited online school of digital communication studies. Here are some things your brand can learn from the master of Winning:

Use it When You Got It

On Monday September 19th, Comedy Central will air The Roast of Charlie Sheen. Even without the aid of the late master roaster Greg Giraldo, this edition of the yearly series is poised to be the most noteworthy yet. With Comedy Central’s ratings down seven percent from last year, the network is banking on the outrageous behavior that Sheen is capable of delivering.

In preparation for the event, Comedy Central has unleashed a viral marketing campaign which includes tactics such as bus ads in New York, advertisements on apartment buildings, and even the hashtag #sheenroast in the copy of all traditional and web based advertising.

Comedy Central and Charlie Sheen are cashing in on all of the buzz created from the string of controversies surrounding the man who once played Wild Thing in the Major League series.

If there is one thing we can learn from Charlie Sheen, it is that being consistent to your brand’s message is paramount to success in the world of marketing. People don’t follow Charlie Sheen on Twitter because they want the latest news and helpful information, they follow him because he is a borderline sociopath.

The most important part of carrying your online marketing messages is to keep a consistent voice over all major networks. Whether you rely on your mobile website for traffic, your Facebook page for status updates, or your FourSquare account for people checking into your restaurant; making sure you are at an even keel and on the same base on every social media network is #winning. Sheen’s marketing consistency has even gotten him major endorsements from major sites like Internships.com, as reported by the NY Daily News.

Did you go see Charlie Sheen when he went on his massive Violent Torpedo of Truth spoken word tour? No? No one really did. The people who did see him on his tour complained that he just got up on stage and rambled about how the government is hiding information from us #winning. His tour failed because traditional advertisers didn’t want to sponsor him. His tour also failed because he didn’t have a crafted set of material most comics and spoken word artists have lined up before they hit the stage.

Use a Good Marketing Mix

Did Charlie Sheen stop at Twitter? Did Charlie Sheen just make a couple of YouTube videos and call it quits? No. Charlie Sheen took to every media opportunity available. He went on 20/20 and conducted a series interview with reporter Andrea Canning, he spilled his soul on Piers Morgan, and he even discussed conspiracy theories on the Alex Jones Radio Show. In my opinion, Charlie Sheen’s media mix rivals that of Coca-Cola, Verizon Wireless, and Scion combined.

Is Charlie Sheen desperate for attention? Yes. Is Charlie Sheen milking every bit of popularity he has? Yes. When you think about it, most brands don’t survive for the amount of time the #charliesheen brand has. Taking some advice from the former Two and a Half Men star might not be that bad of an idea.