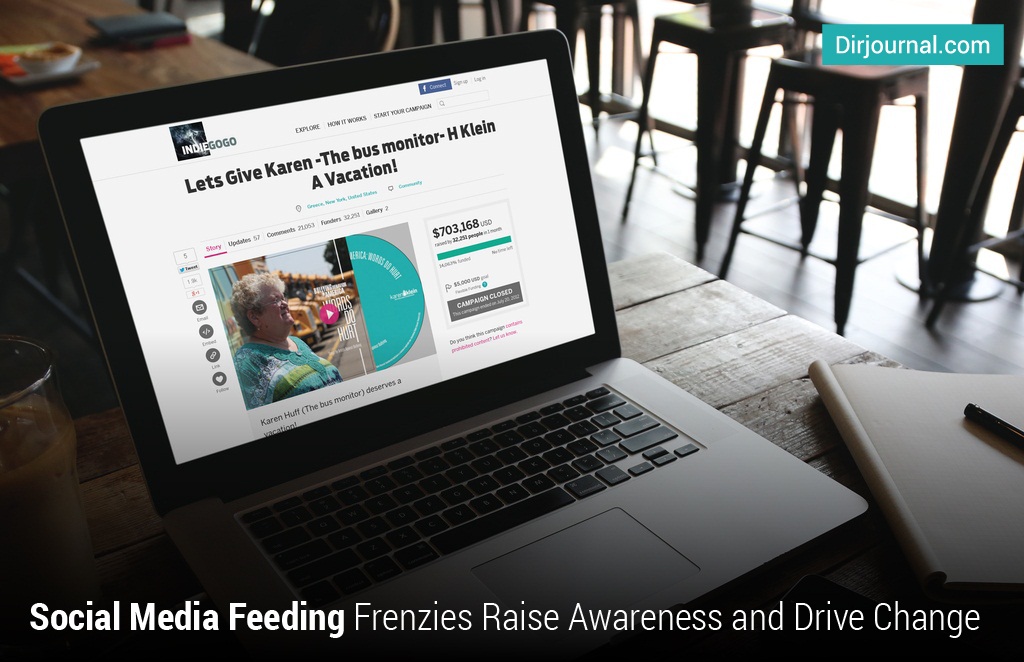 Many people are hoping to go viral someday – or even today!  It does happen, but very rarely does it happen organically without an organized plan to get there.

When an issue goes viral across social media it starts a feeding frenzy that can be used to drive change – IF we know how to take advantage of what is happening.

The major media has jumped all over an IndieGoGo fundraiser started by a blogger – most likely due to the compelling video – but possibly because someone involved recognized the viral content and had the connections to get it covered.

Over 30,553 people have contributed and 27,019 have commented.
And the numbers KEEP on climbing!

Search for bus monitor IndieGoGo or Karen Klein or any related phrases and you will see 5.7 MILLION results including dozens of videos, interviews on major television shows, and posts and articles on major news sites.

This is what Jeff Crilley, author of the book Free Publicity,
calls a Media Feeding Frenzie – and NOW is the time to act
to use this visibility for the greater good!

Bullying is a serious issue in schools and workplaces. While the media is looking for new angles to cover, those who have projects and solutions should be volunteering – actually should have already volunteered the minute the subject heated up.

Examples of worthy causes that can benefit are the upcoming movie project The Bully Chronicles and those who offer Bullying Prevention Programs for schools and employers.

That the money keeps pouring in no matter how high it goes is
proof of what Joanne Wiebe at CopyHackers calls “herd behavior”.

Now that we have the attention of the general public and the media, we can use social media sharing to raise awareness and end what has always been a serious problem that social media has actually made worse.

Social media makes it much easier for groups to spread their hatred further and faster. This is driving so many people over the edge that there is actually a term for it: bullycide.

But still many don’t take bullying seriously. They should. In spite of some of these media stories saying bullying is down, recent bullying statistics say otherwise.

We can use social media to do evil – or to change the world for the better. It is up to us to decide.

UPDATE: MSNBC reports four bus monitor bullying students have been suspended for one year, ordered to to complete 50 hours of community service with senior citizens and will also have to complete a formal program in bullying prevention, respect and responsibility.